The Senior Amateur Golf Tour is open to players of all skill levels. Members of the Tour must be of a minimum age of 50 on or before Oct 1, 2021. The Tour has four separate flights to keep competition fair. You may join anytime during the season for a membership fee which includes Tour merchandise and allows members to play in all local Tour events as well as any SAGT event nationally.

Be A Champion on the Senior Amateur Tour!

Flight leaders from each local tour will be invited to compete against the top tour members across the country at the 36-hole National Championship in Hilton Head, SC.

The 2021 Senior Amateur Tour Championship will be held October 20-21 with a flighted skins game on October 19.

Sign up today for Golfweek's FREE newletters reporting on the latest and greatest happenings in the game of golf.

The 2021 Senior Amateur Tour Championship will be held October 20-21 with a flighted skins game on October 19. 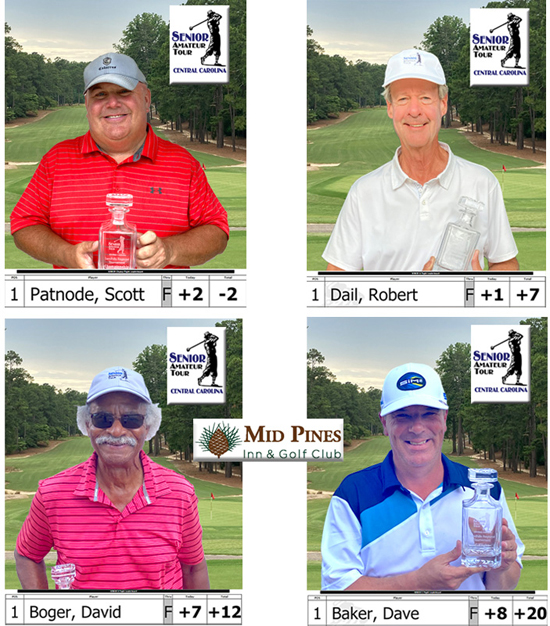 The Central Carolina Senior Amateur Golf Tour hosted a two-day Regional at the Mid Pines Resort in Southern Pines, NC on Monday July 12th and Tuesday July 13th. Over 150 players registered for the event and the competition was fierce.

In the Champ flight, Scott Patnode (Charlotte) used an opening day four-under-par 68 to help him claim the victory. His two-day total of 142 was good enough for a four-shot win. Runner up Steve Kubik (Eastern) also posted 68 on day one and followed with a score of 78 for a 146. Dale Fuller (Eastern NC) and Mike Gentry (Charlotte) finished T3 with two-day totals of 151, while Trey Coker (Louisiana) and Craig Sturdivant of Sanford tied at 152 to finish T5.

The A flight saw Bob Dail of Wendell shoot one-over-par 73 on day two, and added to his day one 78 for a single-shot win and the trophy. Eric Neidermeyer (Atlanta) posted 77 on day one, and carded 3 birdies plus an eagle day two to post 75 and a total of 152. Keith Thomas of Sanford finished in third place with scores of 78-75-153. Four players shot scores of 156 in a T4 finish: Bruce Gantt (Charlotte), Ron Brady, John East, and David Ganus (all from the Central Carolina). CT Ton of Greensboro carded 79-78-157 to claim 8th place.

The B flight was won with a total score of 154 by 83-year-old Dave Boger of Greensboro. Dave has been playing on the tour for a long time and has always been a very consistent player. Tim Fyfe (Chicago) finished a single stroke behind in second place scoring 155. Terry Dunn (Atlanta) placed third with a score of 160 as Jamie Branham of Kingston and Nolan Elenz (Charlotte) shot 161 to end the day T4. Nelson Sanchez (Eastern NC) shot 162 to take sixth place, Gene Jones from Thomasville posted 163 in seventh, and Tim Prevatte (Eastern NC) carded 164 to claim eighth place.

Central Carolina’s Dave Baker of Greensboro took top honors in the C flight with scores of 84-80-164. In the runner up position, Tony Mooneyham of Sanford posted a two-day total of 172. Third place was a three way tie at 173 by Marty Carpenter of Southern Pines, Vic Lawrence (Charlotte), and Marty James (Charlotte). Sixth place was another tie as Greg Martin of Whitsett and Randy Garver (Charlotte) both posted two-day scores of 175. Carnell Luckett (Eastern NC), Jerry York (Charlotte), and Ken White of High Point finished T8 with matching scores of 176. 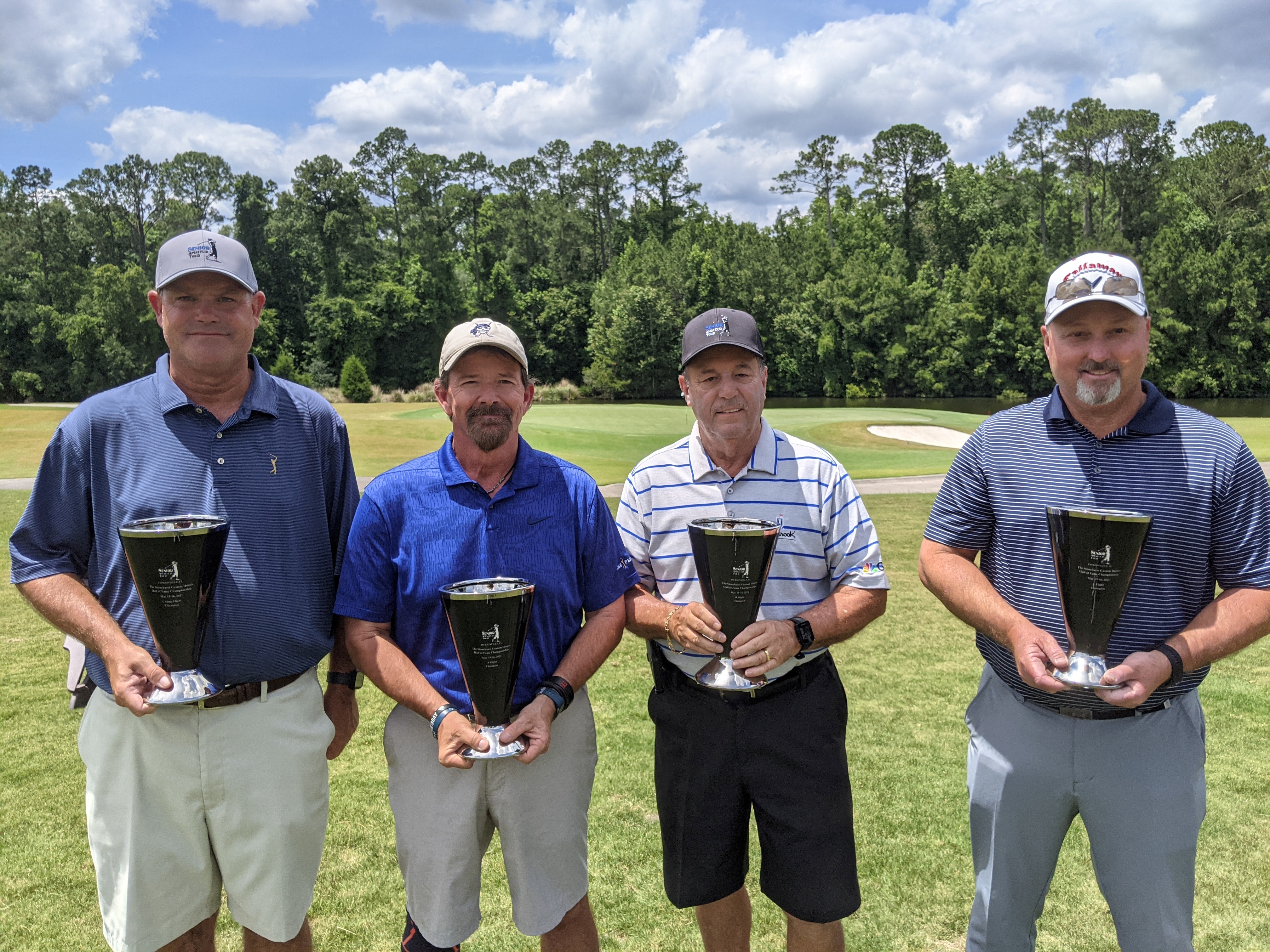 The Jacksonville Senior Amateur Tour held its second two day major of 2021 at the World Golf Village home of the World Golf Hall of Fame. 114 players, including visitors from as far away as NC and Louisiana, took to the Slammer and Squire on Day One followed by the King and the Bear on Day Two. Under beautiful skies and warm weather the players took to the course for a 8:30 shotgun start.

Champ Flight: Bryan Benton (Jax) came ready to play and jumped out to a six stroke lead that included four birdies for the round. His final score of 71 made the rest of Champ Flight come out firing on Day Two. Benton shot a second day round of 73 while feeling the heat of new member Rob Bringardner (70) and Mike Ellison (72) who both shot up the leaderboard getting off to fast starts. In the end Benton was able to hoist the trophy. Special note Jim Hammons had the only superskin on Day One for the largest payout in the Jacksonville Tour's short history.

B Flight: Well we couldn't have a two day major without a playoff. Ernie Wheaton (Jax) fired a great round of 79 for the round to take a two stroke lead over Gordy McHardy (LA) on day one with Mark Eichorn (Jax), Ray Rodriquez (Orl) and Glen Shipe (Jax) carding rounds of 82. Day Two saw some great rounds turned in as Ray Rodriquez (77), Jim Schoening (NCFL) (76), Mark Eichorn (79), and Donnie Thomas (NCFL) who shot the best round in B flight for day two with a 75. In the end, Ray Rodriquez (Orl) and Jimmy Schoening (NCFL) both had two day totals of 159. Back to the course for a playoff they went with Ray Rodriquez becoming the first back to back winner in our short history securing the victory on the 1st playoff hole. Mark Eichorn (161) and Gordon McHardy (164) placed 3rd and 4th respectfully.

C Flight: A tie at the top of day one as Mickey White (Jax) and Terry Lunsford (CNC) who both shot 83 in the opening round and taking a four stroke lead over Jeff Weaver (Orl), Ted Olkowski (Jax) and Jerry Lorenz (Jax) who stayed in the hunt with rounds of 87. Day Two saw Mickey White fire another great round (81) to capture his first tour victory since joining in 2020. D.J. Jackson (Char) who came roaring back to apply some heat took second with a two day total of 171 while Terry Lunsford recorded 172 for the event and take third. Jeff Weaver (Orl) took fourth also with a two day total of 173. George Ricardo (Jax) carded the best round on day two carding a great round of 80 highlighted by three birdies.

This two day major was by in large the largest turnout for a Jacksonville Senior Tour event in our short history. The staff at World Golf Village were gracious hosts and we have already planned for a return visit in 2022. Great play was complimented by the fun and laughter before and after each round. We thank all who attended. 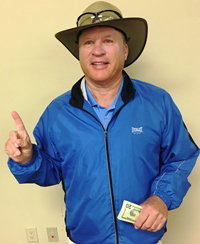 Howey-In-The-Hills, FL   94 players from 14 Senior Amateur Tours across the country gathered at the beautiful Mission Inn Resort for the second Florida Senior Regional.  Chilly weather greeted the golfers all weekend.  But it did not diminish everyone’s enjoyment of two of the top courses in Florida.

Congratulations to all the prize winners and a big thank you to all who came to play! 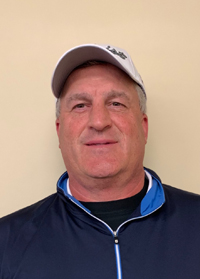 Championship Flight—Tour veteran Chad Frank opened with 72 on Saturday and followed it with 74 Sunday to cruise to a 9 stroke victory over Tony Boatic from Southeast VA tour, John Ward and Bill Shufelt (both of Orlando). 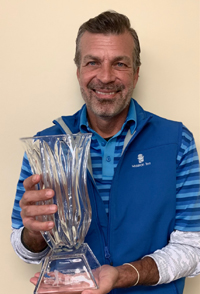 A Flight—Mike Legeza (Jacksonville) and Barry Hauser (Orlando) tied with 36 hole scores of 161 to force a playoff in A Flight.  Mike took the title on the second extra hole. Jason Manning and Al Clerico, both Orlando players were two strokes back. 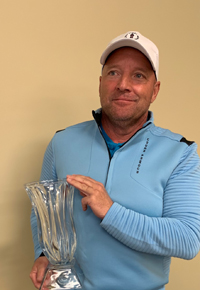 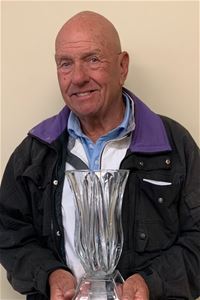 C flight—Gerard Brennan (Myrtle Beach) posted 84-86-170 to ease past Scott Brunt (Jacksonville) by four to take the cyrstal.  Tied for third, one more stroke back was Sue Hatcher (Jacksonville) and Jerry Fleming (Tampa).

Hilton Head Island, SC – This year’s Senior IceBreaker Regional was played in Sea Pines Resort (Atlantic Dunes & Heron Point).  In the second year of this regional tournament this was the largest field ever with 86 players from over 13 different tour cities across the country.

In the Championship Flight, Trey Coker (Louisiana) Terry Lanning (Hilton Head/Savannah) and Steve Kubik (Eastern NC) all finished tied for first at 146.  One the first sudden-death playoff hole Kubik existed with a bogey while Coker and Lanning made pars.  Finally on the sixth sudden-death playoff hole Coker was victorious with a birdie.  All the previous five holes were tied with pars as Lanning finished in second and Kubik third.  Bryan Benton (Jacksonville) was fourth at 148 and Steve French (Charlotte)and Jeff Brischke (Charlotte) both tied fifth at 152.

In the B Flight, Jerry Drewry (Indiana-Western KY) won by two shots for the victory at 82-81-163.  Mark Toloso (Louisiana) finished second at 165 followed by Mark Odekirk (Jacksonville) third at 167. John  Turner (Hilton Head/Savannah) and Jeff Patterson (Central Carolina) both tied fourth at 168.

In the C Flight, we had a four man sudden-death playoff.  Shane Smoke (Louisiana) Patrick Fowler (Charlotte), Doland Miller (Southeast VA) and Jerry Brennan (Myrtle Beach/Wilmington) all tied at 176.  After two holes Shane Smoke came out victorious with a par on the second sudden-death hole.  Jimmy Sullivan (Charlotte) rounded out the top five place only one shot back at 177.

The Senior Amateur Tour plays in over 16 areas across the country and host single and two day tournaments.  To get your tour card simply go to (www.senioramateurgolftour.net) to join the Tour and be a part of a great nationwide tour.  The tour is open to any player who is 50 years of age or older.

Jim Flowers of Jacksonville, FL fired a two-day total of 79-78-157 to win the B Flight Championship by four shots.  Dave Schrott (Jacksonville, FL) finished in second at 161 followed by Glenn Whalen (Chicago) solo third at 162.  Edward Greenfield (Arkansas) finished fourth at 163 and Hollis Peery (Central Carolina) beat out two other players in the tie breaker for fifth place.

The C Flight Champion came down to the final hole to determine the winner.  By only one shot the victory went to Robert Luter from the Arkansas tour with a two-day total of 165. Eddie Jaggers (Central Carolina) was second at 166 and third place went to Steve Taylor (Jacksonville, FL) with a two-day total of 170.  Ron Vail (Phoenix, AZ) was fourth at 175 and Mark Detillier (Louisiana) wound up in fifth with (176).

The Central Carolina tour took home the Team Cup winning by five shots with a two-day total of 1275.  Charlotte NC finished solo second at 1280 shots followed by the Jacksonville, FL (1283), with Louisiana and Eastern, NC tied at (1330).